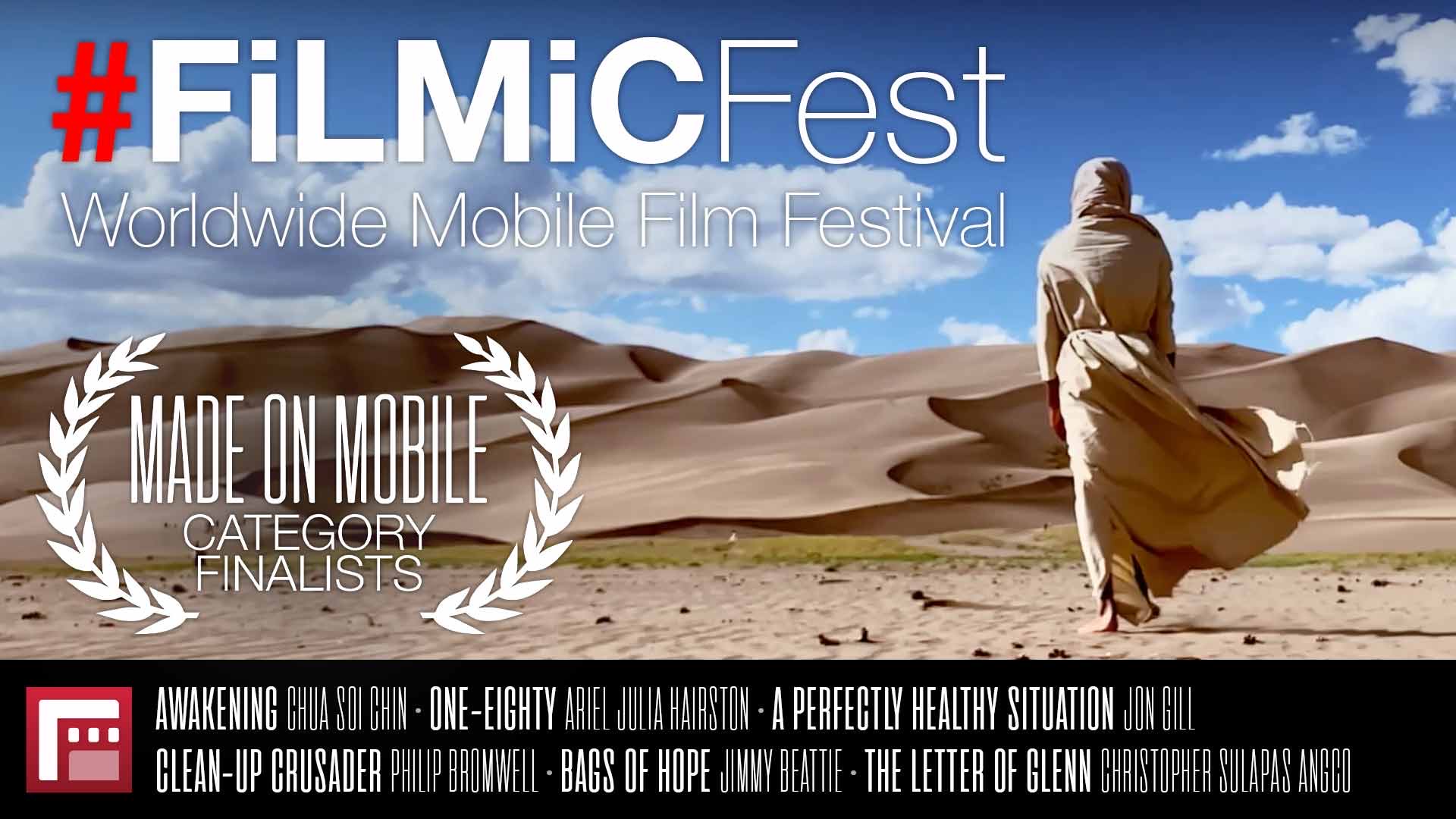 Posted at 00:29h in Uncategorized by hellojon 0 Comments
Share

FiLMiCPro is my go to video camera app for most situations – and now that FiLMiC’s app for still photography First Light has been released, the native Apple camera app is pretty much redundant.

So when I heard about the FiLMiC mobile film festival I had to submit something and, by chance, the perfect project came along and within a week I was done. That film is “A PERFECTLY HEALTHY SITUATION” – please watch on the FiLMiC website or via on my “Films” page.

FiLMiCFest covers any short film (5 mins or under) with at least 70% captured/shot on a mobile device using FiLMiCPro. There are five categories (listed below) including Made On Mobile for films that have been shot AND edited on a mobile device.

So I’ve been shortlisted in Made On Mobile which is (beyond) very exciting – FiLMiC is my first film festival. However, with less than a week before the category winner is announced I thought I’d give you my selection of who I would choose from the finalists…

This is a tough round. There’s lots to like, particularly in Tokyo Underwater and BUTTERFLY MAN – however, for my money the stand out is “JANE DIGBY” by SJ van Breda. I love this portrait of a portrait painter – her artwork, her journey and challenges in her life have been beautifully framed by the filmmaker. The editing in particular is so creative. Editing is my thing, which is probably why I was drawn to it, but it’s particularly well done here.

With respect to the other films in this category, STRENGTH stood out instantly.

In my workshops I try to explain about rhythm in filmmaking. Whether you use music or not films have a rhythm and if, as a filmmaker, you don’t find that rhythm then, consciously/subconsciously the film can feel uneven to the audience. This film feeds off rhythm – from the story, through the direction and the choreography – it’s compelling, mesmerising. I’ve watched it four times now and I’ve been captivated every time.

I really like the compositions in TAJNI NAUK. The oversized image of rapper LMR on the roof of the tower block is strong and pretty seamless as a special effect. However I was equally impressed with the shots captured in camera –  the framing of the stepped tower blocks, emphasised by the camera movement. It’s a visually powerful location and director Lazar Vladisavljevic knows it.

This category is wall-to-wall stunningly cinematic cinematography – and every frame shot with a phone! But it always comes back to the story… and there are a couple of crackers here.

I have to make a special mention of ANOTHER ROOM WITH A VIEW which took a MoJo approach and had me hooked all the way through. However, I can only chose one, and while the narrative is much more simple, I was definitely ’charmed’ by it. ONE CHARMED DAY is day trip with Maisey and mum, shot by dad, Luis Guanzon. This film simply and beautifully evokes Maisey’s wonder and playfulness by way of colours, locations and sounds. So much more than the sum of its parts.

As fiction has 10 entries I’m going to select two.

Simply put, CLICK BAIT has the essential ingredients of every great horror – simple, smart and genuinely disturbing… watch at your peril!

PARKING. Is also a simple little story; but it’s the combination of a stylish colour palette, inventive shots, and creative editing that squeezes every visual ounce out of the story.

All things considered, PARKING would be my final choice for the category and the competition as a whole – great job.