I’ve been following Documentally (aka Christian Payne) ever since a mobile network provider gave him the challenge of hitching from Lands End to John O’Groats with nothing but a handful of prepaid sim cards.

This would have been 2009-ish and the very early days of social media. However, using Twitter and whatever other social platforms were emerging at the time Christian negotiated the country, taking lifts and accepting offers of couches to sleep on and completed his task.
So, eight or nine years later he very kindly invites me to join him on a digital storytelling workshop to talk about my film, Open Close Movie, made entirely on an iPad.
We did some various bit and bobs but the video below is the live broadcast we did on Periscope. 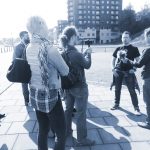 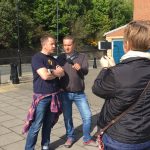 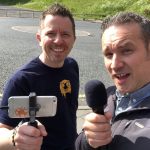 It was a great afternoon and I met some great people who were attending the Thinking Digital conference at the Sage in Gateshead – I couldn’t stay because I was running a workshop in Glasgow.
So I hope to be back in Newcastle in November with #MadeOnAMobile – it was my first time in Newcastle and I loved it – particularly being a fan of bridges, the place is chock full of them!
Anyway, hope you enjoy the interview…